When I first started running, a friend of mine was extolling one of its many virtues by stating that “All you need is a pair of shoes.”  Well, that was right up my alley.  I get to buy shoes and that’s it?  Sweet.  I am a shoe shopping expert.  So, I set out to Athletic Annex to go buy my pair of shoes.  I introduced myself, and shared that I was never a runner and had signed up for a 5K.  The sales person was very nice and supportive, and then stated that we could start by videotaping me running.  I literally almost turned around and walked out of the store.  Are you kidding me?!  You want to videotape me and my bouncing post baby belly running?  He obviously noted my stricken face and quickly reassured me it was from the knees down only.  Whew… Once I started breathing again we did the videotaping bit, he analyzed my foot strike and got me into a great pair of shoes. 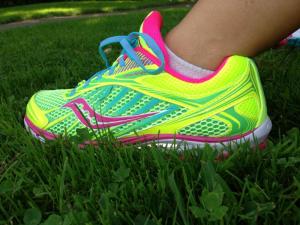 A couple of weeks into the couch to 5K program, a personal trainer at my gym was talking to me about my newfound fitness plan and started telling me about the benefits of exercising with a heart rate monitor.  To be honest, I wasn’t really sure about it, but figured I would try it.  So, I bought a Polar heartrate monitor and actually have been very pleased with it.  On my long runs, when my heart rate starts to go up, I know it is time to hydrate a bit more or have something with some calories in it (I’m a big fan of the sports jelly beans instead of the gels).  It also helps me more closely approximate my calorie burn which I use in the My Fitness Pal app.

Well, about a month after adding my heartrate monitor I was on a run and totally bit it.  I was watching this teenager who actually looked about 12 years old and was so focused on him not hitting me with his car that I literally face planted.  Although I was able to complete my run despite my newly skinned knees and torn running pants, I realized that I probably should start running with my phone.  Therefore, an arm band was added.  Because I was now running with my phone, I added the Map My Run app.  It keeps track of my running workouts, and since it uses GPS, it literally maps my route and calculates the distance traveled and the pace.
My son thinks that my phone is the most fun toy ever made.  It lights up, makes sounds, and is super fun to teethe on.  Sigh.  Since the iPhone is not drool-proof, it now does not play music or transmit sound through headphones.  Running with my phone had spoiled me with my music availability and now used to running with music, I felt lost without it.  I then began “borrowing” my husband’s Ipod mini and using a wristband to have easy access to change songs or playlists as needed.
About two months ago, I hit a weight loss plateau.  My weight was Not budging.  I added additional workouts, tried to change up my diet, and nothing was working. One of my friends started telling me about her FitBit One and how much she loved it.  Needless to say, I splurged and got the FitBit One.  And, it really is great.  It tracks steps taken, flights of steps, calories burned, and my (lack of) sleep.  The other great thing about it, other than its ability to sync wirelessly with your phone, is that it links to the My Fitness Pal app.  I log my exercise and food intake into My Fitness Pal and this then transmits over automatically to the FitBit app.

So yes, I probably look ridiculous when I run.  I started with a pair of Sauconys, and now have a heart rate monitor, my heart rate monitor wrist band on one side, an Ipod mini on my other wrist, my iPhone on an armband, and my FitBit One on my hip.  My iPhone apps also reflect my increased amount of technology.  I started with My Fitness Pal to log my food, and now have added not only Map My Run and FitBit apps, but also the Pure Barre App.
Some people may say all you need is a pair of shoes, but hey, I’ve always liked accessorizing.

3 thoughts on “All you need is a pair of shoes…”