It’s 2014. Men and women are sharing, though perhaps not equally, more of the household and parenting responsibilities than ever before. So I was aghast when I recently read on a doctor mom site I have been following recently a “husband rant” from an exasperated woman who literally does everything in terms of home upkeep (cooking, cleaning, organizing, bill paying) and childcare (feeding, bedtimes, school drop offs) while her husband apparently enjoys his recliner and a beer. Whoa!

Are there modern men who really do not help around the house or with the kids? At all?

I am struggling to wrap my head around this unbalanced relationship because I have honestly not witnessed this in my generation of women friends across many different career paths. Even among my friends who have chosen to be housewives (if you want to know why I didn’t use the term “stay-at-home mom” read here) their husbands go out of their way when they get home from work or a business trip or just a day on the golf course to help with the kids or do some chores around the house–and not just the traditional male household tasks like lawn mowing and snow shoveling. Among my surgeon mom friends, even among some who are married to other surgeons, the balance of homemaking and child rearing falls on their husbands though there is often a village or a metropolis involved in making it all work.

As I was reflecting upon this husband rant, I was obvious to me that I am that person in my relationship. “Does my husband rant about me?” I wondered. I don’t have a recliner and I don’t drink beer but if you replace the former with a chaise on the sectional and a dark chocolate salted caramel…..yup, that’s me.

He was travelling for work last week and I was a fish out of water keeping the house and the kids afloat. I had to fend for myself for a variety of daily tasks (making my morning cup of coffee, making my lunch, taking out the trash, charging my phone, setting my alarm, going to the grocery store, putting gas in the car, walking the dog, getting the kids do their homework or take a shower or go to bed or do anything that involved not annoying me, getting the kids to school, making an evening meal that doesn’t involve a frozen pizza, cleaning up after said meal, paying the nanny and the house cleaner, doing my delicates [yes he does my delicates, I am that lucky!]) that I too often take for granted because he gets them done without me ever asking. It’s as if he always has and I honestly don’t know another way of life.

Sure this way of our life started because I was always working a lot more than him. Early on, there were so many days where I was just too tired to even brush my teeth or walk the 10 steps from the couch to my bed that chipping in with housework did not even occur to me. At first, I tried to use my one weekend off to help with household chores but it quickly became apparent that such precious moments away from work were best spent enjoying each others’ company and building memories that didn’t involve Lysol or writing checks (recall, this was the pre-online banking era).

Since my husband’s mom had raised him well, he was able to take over  all of the housework even though both he and I were raised by a generation where fathers were not particularly involved in household responsibilities unless there was a power tool involved. In our life he does everything that his mom and my mom traditionally did around the home and everything that our dads did too. Luckily, as we have grown older and more financially stable, we have been able to outsource some of the more onerous household tasks.

When we had kids, I couldn’t be the one who stayed at home. It’s just not something that exists in the career path that I chose. So, he did. He was a great stay-at-home dad and I was not that person who came home after 37 straight hours at work and offered to take the kids off his hand so he could have a break. I suppose in retrospect it wasn’t fair for me to do nothing (though I did supply 26 months of breast milk that I hoped  offset the fact that I changed <1% of my two kids’ diapers) but I was in survival mode during those years. And he’s done 99% of the school drop offs, doctors appointments, etc. since these kids were born, even when he was back in the work force full time because his 40-50 hour work weeks were always more forgiving and flexible than my 60-120 hour work weeks.

So, as hard as this life must have been for him, we fell into survival mode together. He and I fell into a routine together where he was the rock of our domestic life. It continues to this day. As an attending surgeon with a research focus I have some more flexibility to attend to homemaking and childrearing but still a lot less than him. And, he’s just a natural at it after all this years while I am, well, a fish out of water.

Embed from Getty ImagesI find it heartbreaking that this woman is in a position where she feels so unsupported in her home life and in her work as a parent from the person she is hoping to share the rest of her life with; but I am grateful to her for making me take a moment to really appreciate how lucky I am to have found a partner who makes it so very easy for me to do the many, many other things that I do when I am away from our home and our family. Is it perfect? No. Do we ever fight about chores or kids? Hell yes. Do I say thank you often enough? Nope, definitely not.

I am fortunate that I don’t really have much to rant about when it comes to our home and our family. So, really, does he ever rant about me?

He should. But only after he brings me my dark chocolate sea salt caramels as I  sleep on my chaise. 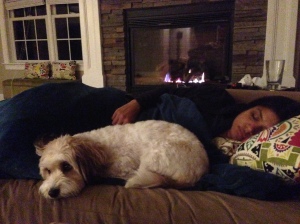 3 thoughts on “Does my husband rant about me?”