The first day of summer has finally arrived. I am making plans to stay fit for the coming months so that I can head into fall half marathon season both motivated and rested.

You see, after a long, hard winter it ended up being a glorious spring for this aspiring runner.

Between Christmas Day and April 4th I never stepped foot outside in my running gear near my home base. A total of 120 inches of snow had accumulated out side my front door. The roads were too narrowed by eyeball height piles of white fluff that lingered into the early days of April. Thankfully, a few work trips to Vegas, Chicago, and Orlando allowed me to squeeze in 7 short runs. That was it. I ran the Disney half on January 10th and only ran seven more times during the rest of Jan, Feb, and Mar.

It was a long, hard winter.

When the roads and sidewalks finally emerged in early April the pressure was on. I had signed up for a Ragnar Relay months before and it was less than 5 weeks away. I didn’t feel pressure to train for distances (my 3 relay legs were supposed to range in distance from 3.2 miles to 7.6 miles and I was confident that my untrained body could pull that off based on past experience) but I did feel urgency to become comfortable running in the dark (something that I had tried once and it had freaked me out) and running on little or no sleep (I had previously never run post call; it turns out that the post-call runs are perfect for Ragnar training).

And so it began. Random runs of random distances at random hours. #RagnarPrep

Meanwhile, there was Ironhorse half marathon on the horizon. The event that had become an annual tradition for me and my best friend from residency. She moved just two hours south of me and a really lovely half course was just an hour between each of us in Simsbury CT; and, it did not occur on a prime weekend thus making it easy for me to get the time off to run. In years past, we (I run with my husband too) had loosely adhered to a 8-10 week half training plan on the Runner’s World app. Loosely because until recently getting my act together to get in the weekday runs was impossible; it would have required waking up sufficiently early enough to actually run. (Thankfully, I have pretty much turned that around with my detox.) This year, we had to get through Ragnar before before we could wrap our heads around training for a half.

And then the May call schedule came out. I cannot remember the last time since graduating medical school 15 years ago that I had all 3 days of the Memorial Day long weekend off. Since my first half a few years ago (the half that started this blog and the half which I did on a crazy whim with just 3 weeks to go having never run more than 6 miles in a row), I was always envious of my running friends who ran the Boston Run to Remember that weekend. I never could. I was either on call, pre-call (and thus needed to be available as back-up), or post-call (there’s no way to get to a 7am gun let alone run 13.1 miles after being up all night). So, when the May schedule gave me the gift of the weekend off, I was delirious to find out that the race was not sold out.

And there it was. My 30 Day Race Plan. From May 8th, the day the vans pulled up for Ragnar, to June 7th I ran an overnight relay with 3 legs that ended up ranging from 3.2 to 9.0 and two half marathons–one urban with a huge field with thousands of runners and the other through the Connecticut countryside along with just over 1500 other runners.
And now my plan for the summer. 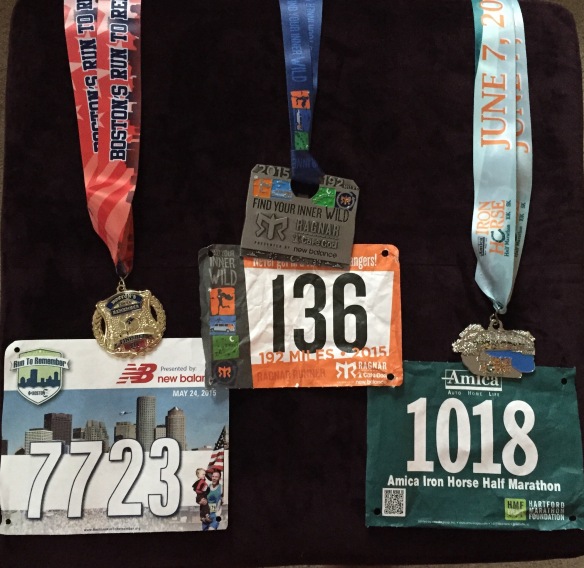 I am in no hurry to pack in the miles. I am ready for a break from distances for a few weeks but I do want to keep up the running momentum. This is something I have struggled to do in the past with our humid summers. But I am a different person now, capable of getting in run in the wee hours before it warms up if needed. I have trained my body to do distances on very little prep. Now, I want to get a little faster (and hopefully drop the 7lbs I gained during the sedentary winter–one craves comfort food when snowed in and please don’t ask about the high quality cardio equipment I house in my basement gym).

My goal is to run 3 miles 3 times a week no matter what. There are lots of hills in my area. Though I managed to run my first leg of 3.2 miles at Ragnar at a 9:59 pace running a 10 min/mile has never been within my capacity. I hope to turn that around too by the end of the summer. While running for has never been about speed for me, I do feel that I will be much more consistent getting in quick running workouts in the future if in can do three miles in 30 minutes. Along with the weekly running goal, I also plan to hit my local studio for Pilates, Barre, Zumba, or HIIT at least three times per week for additional strength building, core work, toning, and cardio (with different muscle groups than running) that will all make me a better runner.

I am honestly relieved not to have a high pressure race goal this summer. Instead of focusing on a date and location I am focusing on myself and looking forward to a fun running summer which will leave me well rested but fit and energized for a couple of fall half marathons that I am eying depending on the call schedule.