“The world ain’t all sunshine and rainbows. It is a very mean and nasty place. It will beat you to your knees and keep you there permanently if you let it. You, me or nobody is going to hit as hard as life. But it ain’t about how hard you’re hit, it is about how hard you can get hit and keep moving forward, how much can you take and keep moving forward. That’s how winning is done!” – Rocky Balboa

I have written before about how I think we over-coddle our kids these days, always making them feel like winners even when all they are is a solid mediocre. It’s rare these days for our children to feel like they did anything less than come in first; so, the sucker punch of not winning, when you tried really hard and truly, deeply thought you deserved to win, is a totally unfamiliar feeling.

Recently, my 11 year old daughter and her tween ethnic dance group participated in a competition. These girls practiced on their own well in excess of what the teacher demanded. They propped each other up. They were ready to hit is out of the park on the day of the show. And you know what? They did. It was a well-coordinated symphony of smiles and movement with pops of color in an eye-pleasing fashion. It was truly a joy to watch.

The girls were the last in their age group and genre to perform so when they hit the final dazzling pose of the dance I thought for sure they were going to win. But they did not. They didn’t even place. Everyone, girls and parents alike, was very disappointed. Like many, I was not sure why the girls didn’t win and it did bug me. So I said to my daughter in the aftermath of the dance competition, “That sucks but you practiced a ton, did a great job, and should be proud of that and move on.”

Personally, I thought this was a parenting highlight for me.

Sometimes no matter how great and amazing and talented we are, we don’t get chosen. Occasionally, it is because we actually think we are better or more competitive than we really are; but, more often there is just an idiosyncratic way that these things play out in they eyes of those doing the choosing whether or not the choosers are utilizing strict guidelines.  In the weeks after the competition, I have silently followed along as a number of other parents a launched an email trail of their disappointment. The initial disappointment brimmed into anger and then to demands to know what the judging criteria were, what the ethnicities of the judges were (in case they could bias the results), etc. There is a draft letter now that is presumably being sent to the leadership of the organization that hosted the event.

I get the disappointment but I don’t get the zeal to defend the girls’ honor so to speak. I have no idea if the other girls feel that same way as their parents. But, I do know that I don’t want my daughter to expect her parents to get into fighting mode whenever things play out in a way that doesn’t go her way because it’s a life skill to know when to move on. And, while I do want her to be brave enough to fight the fight when warranted (think Civil Rights Movement, Marriage Equality….,) I don’t want her to get worked up in a tizzy every single time things don’t go the way she was hoping.  Life is simply too short to be in fighting mode that often. Rather I want her to learn to be proud of the interest, and the effort, and the lessons learned from each and every experience whether or not she walks away with a championship ribbon.

If we don’t let our kids experience disappointment and maybe even occasional heartache–fair or unfair– they will always believe that life is all sunshine and rainbows. I hope I am raising my kid to weather the clouds and storms that will surely occasionally cast a shadow on her adult life so that she can be resilient and keep moving forward. “That’s how winning is done.” 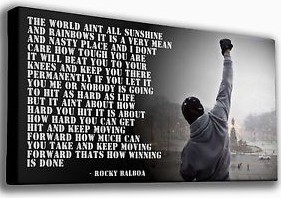 © Hot Heels, Cool Kicks, & a Scalpel [2013-present]. Unauthorized use and/or duplication of this material without express and written permission from this blog’s author and/or owner is strictly prohibited. Excerpts and links may be used, provided that full and clear credit is given to the author and www.heelskicksscalpel.com with appropriate and specific direction to the original content.